Ten years ago, student union DJs were pretty limited in their ability to cater for the masses. One option was to drop 500 Miles by The Proclaimers, and trust every group had at least one Scottish mate to jump around with. Thankfully Arctic Monkeys weren’t far behind with I Bet You Look Good On The Dancefloor, a sort of Jumpin’ Jack Flash for Millennials.

Then came the fastest selling debut album and a demand for UK shows so great, friends of mine had to travel to Paris for any chance of seeing them live. Andy Nicholson was on bass but, in early 2006, left the band.

In the present, he’s making me a cup of Yorkshire Tea and giving a tour of his studio in Sheffield city centre; a kitchen, two recording rooms and his managers office. I was expecting (and hoping) to meet a kind of Hugh Grant character from About a Boy. Living off yesterday’s fame and fortune with nothing more than spare time to show for it.

However, this isn’t the case. He’s a renowned producer (with both Sticky Blood and hip hop outfit, Clubs & Spades), runs his own studio and has ran The Bowery, a New York-subway themed pub, for the last 6 years. He’s also bang into photography.

Tour of the office

Andy’s recently back from recording around the country, which explains the luggage lying around. His yellow bass guitar, that he used on the early Arctic Monkeys records, lies in an open case. It’s instantly recognizable from the music videos, though with the addition of “Andy” etched into its body.

“My favourite bassist, Paul Simonon of the The Clash, did the same with his. So one day I ended up doing the same with mine” he says, referencing the markings similar to those under the boots of Buzz Lightyear and Woody.

“I keep telling my wife to get that as a tattoo, on the foot. But she’s not up for that”

Like his old school mates, who now live in LA, his appearance has changed somewhat from the days of Lyle & Scott polo shirts. It’s more tattoos and bandanas.

“I never intended to be covered in tattoos, but they all just spilled over. There’s no real psychology to it all, though you could have a field day trying to figure them out”.

Birds, nautical equipment and the words ‘Steel City’ to name just a few.

In the smaller studio, hanging on the wall, is a triple platinum vinyl record for Whatever People Say I Am, That’s What I’m Not.

I recall the time they cleaned up at the 2006 NME awards, when the Sugarbabes did a cover of I Bet You Look Good On The Dance Floor. Alex Turner thanked them on stage, before Andy joked “wrong key though”.

I’ve only been here 10 minutes and it’s already clear to see the ‘band wit, reliably swift with a self-deprecating quip’ called out by Blender magazine all those years ago.

Despite confessing to knowing “little about technology” the main studio is pretty well kitted out with all the latest gear; drum machines, MacBooks, synthesizers. In the one corner sits the TV and Playstation where regularly Pro Evo tournaments take place.

“People say they like FIFA because of the names, badges and kits. Well why don’t they just go and watch Sky Sports, then?”

As one half of Sticky Blood with Jamie Shield, Andy collaborates with various artists including Tom Prior, Terri Walker, Jenna G, George the Poet and Mic Righteous.

“Through Sticky Blood we’re always working with local artists here in the studio who end up collaborating with Clubs & Spades stuff. We had a big collaborative push 10 years ago; it’ll probably come back around. There are loads of people doing loads of different stuff in this city.”

Clubs & Spades also provides him the excuse to get the bass out for live shows, a welcome return from the world of the laptops.

“I’d been in bands before. So me and Jamie moved on to experimenting with just laptops, syncing stuff and triggering things [for Clubs & Spades]. We did one show like that, and were like this is just…shit. It sounded good, but when you see two rappers on stage standing in front of two blokes on laptops, who look like they’re talking to each other on emails, it’s just not right. So we sold all that gear, and concentrated on adding a band feel to Clubs & Spades.”

Though it was never that big a jump from the indie album of his generation to hip hop.

“I’ve always listened to hip hop. Al’ will tell you, we used to listen Outkast, Dre, Ludacris before we could play instruments. Me and Helders used to go to Al’s house on a Saturday, to mess around making crap hip hop.”

He also recalls seeing The Strokes at Alexandra Palace, with Alex Turner & Matt Helders, and spotting Carl and Pete from The Libertines in the crowd – “somewhere there’s a photo of them two, with the three most excited kids ever”.

Andy carries his Fuji x100s everywhere. I flick through some of his most recent shots. The Lake District and his dog, Dolly. Then there’s one of him and Turner grinning next to a snowman.

“I went up to Al’s house a couple of days ago [who was back from LA for Xmas]. We built a snowman and his Dad took a photo. It’s always good to see him. He’s not Alex Turner to me, he’s just Al’. My mate I went to school with.”

Sitting on a Chesterfield, he takes me through photos I’ve curated from his site TwoGoldTeeth.

“I approach photos as I do music. Most things are computer generated these days to get perfection. The perfections are in the imperfections. I think that’s why people fall in love with demos. I’m all about it feeling right, not looking right”

“There are two sides. There’s the documenting side of things, like trips to Amsterdam. But then there are things I see regularly. I’m not documenting that I went to a chip shop, but it’s a regular site”.

So going through his photos… 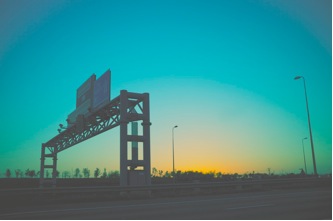 M1, somewhere down South (Via TwoGoldTeeth.com)

“That was after me and my mate had just been to watch Sheffield Utd play Hull at Wembley, losing 5-3 in the semi-final of the FA Cup”

“What I like is it’s got the ‘The North’ written on the sign. At first it was about the sunset, not the sign, but if only I had taken it sooner would’ve got the full text in”

We move on. Next up is from the theme of travel. 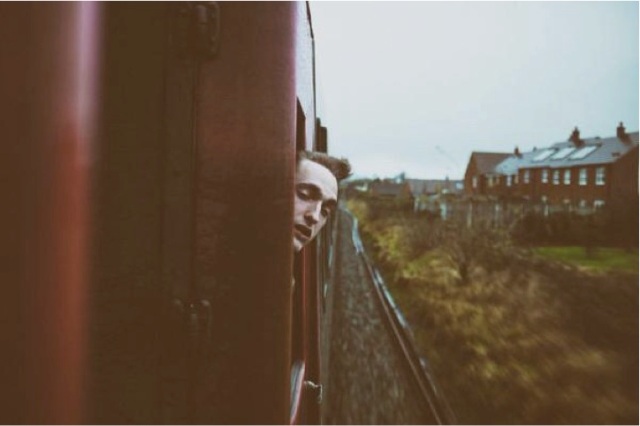 Jamie “Manakin” Shield, train to Bristol via Cheltenham (via TwoGoldTeeth)

“It’s very British. The train itself looks like it’s one of them old school carriages, where you’d sit opposite each other. But it’s not, it was a CrossCountry train to Cheltenham from Sheffield.”

“It’s about 6am, as we were just about getting off. Those houses look like red brick ex-Council houses that’ve been converted” 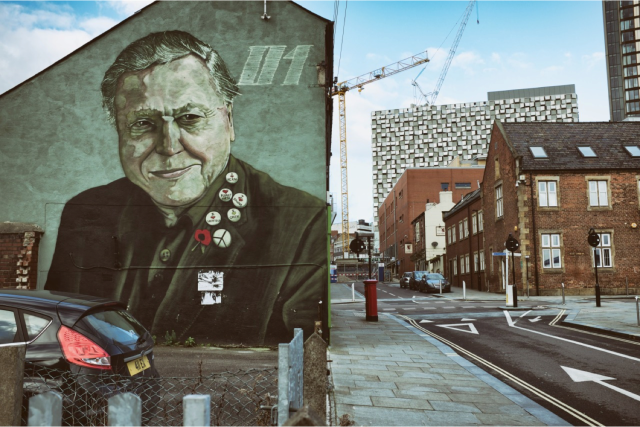 “It’s very Attenborough. There’s a place me and my wife like to go to, called Tamper Coffee, which is right on the corner there. This was Christmas Eve and we’d just met her parents in Tamper for some food”

Marcus (rapper from Clubs & Spades) describes how Sheffields graffiti artists from the 90’s have turned street artists. This piece is by Rocket01. 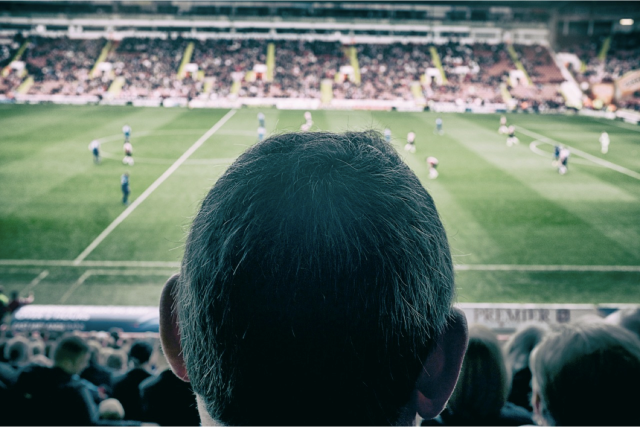 “That would’ve been a shit match, against somebody crap and the most interesting thing happening was back of his head. That’s Utd for you, football’s amazing you can’t keep your eyes off it”

“The ground is literally 5-minute walk from here. In fact I’ll take you up roof to show you”

Up on the roof

Up on the roof: atop the roof of Andys studio with the snow covered City below

Up on the roof Andy points out Bramall Lane, where he attends most home games thanks to a friend at the ground. He talks through the skyline; an old BT building, the Grosvenor hotel (earmarked for demolition) and the surrounding valleys.

“They say Sheffield was built on seven hills”, pointing out towards the snow covered suburbs on the distant hills.

With an American Dad, he spent a couple of his early years in Santa Barbara but mainly grew up in Sheffield. First in Manor Park. Then Stocksbridge, where he met the gang. While the others lived in High Green, he moved to Hillsborough as documented in Red Lights Indicate Doors Are Secured.

As depicted in his photography, the City is changing and no more evident by the cranes and demolition going on around us. Next door they’re building a cinema/Primark complex.

“They’re always building something around here. Hopefully it’ll bring some people to this side of town. All they’d need to do is build an Apple shop and that’ll rejuvenate the whole area”. Marcus tells me they have BBQs here in the summer. The people down below on the street have no idea, “nobody around here looks up”.

The door to the roof opens, it’s Marcus’ sister who’s come to pay compliment to Andys leather jacket. After satisfactorily passing as authentic leather via the trusted smell test, Andy confesses its origins.

“I got this in Amsterdam, just in a shitty mens clothes shop” he says, scanning the street below “bit like that Blue Inc down there”.

Our conversation quickly descends into the British High St, the mysterious C&A in Amsterdam and the longevity of 90’s clothing; NaffNaff, Spliffy, The Sweater Shop. “Unless you chucked that gear out, it was never going anywhere”.

Andy’s kind enough to humor me with some stories of the old days. Like when David Bowie came backstage after they’d played the Bowery Ballroom in New York 2005, and they pretended to mistake him for the club promoter.

“We weren’t massive Bowie fans, some of the others might be now, but we just had a laugh going ‘thanks for the extra crate of Strongbow, you didn’t need to do that’”

I guess when you’re 19 years old, you say what you want. Time has moved on and nobody more than Andy. Constantly evolving as a creative conglomerate, he’s somebody who’s genuinely fulfilled in what they’re doing.

“I’m only 28. I feel like that I’ve not achieved anywhere near what I want to”.

“To work with the best artists in the world, keep progressing, going to other countries to try new things, growing up, learning to play our instruments better. We’ll probably outgrow this studio soon, and look to build a bigger one”

“As we grow, we might get a few new band members, as coming from a live background I want everything to be live. Ideally with no backing track. It’s certainly getting there”

And with that we said goodbye, with him suggesting a museum and some local ale pubs to fill the void until the 16:57 back to London.