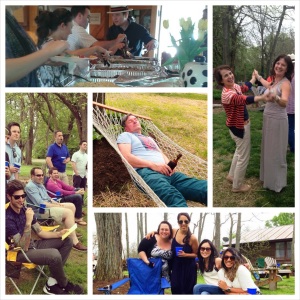 Everyone’s up early for breakfast that is hosted by Ellen’s aunties, which is closely followed by the Chelsea-Liverpool title decider.

We soon order cabs to take us out into the countryside for the last hoorah; a traditional southern cook-out laid on by Molly and Becca and their two husbands Bull and Ryan. The ranch is now home to Molly and Bull, and the place is littered with dinner tables, garden games and the vast majority of the remaining wedding guests.

“Wow, look they’ve got a keg, and everything!”

Bill brought me a signed copy of his book too, and took me through some of the characters he’d been fortunate enough to meet over his career.

After a few days of fast pace, this was exactly what everybody was after; sun, beer, beef, ribs, 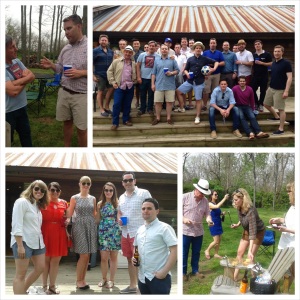 Corn Hole? Right, a lawn game consisting of two teams of pairs. The pairs stand opposite each other, at a rough range of 30ft, each trying to throw bean bags on to each others wooden platform (1pt for landing it on, 3pts for getting it in the hole). The first to 21pts is the winner – though of course as interest peaked we reduced this to 11pt.

Right about now, I’m pretty certain my Dad is midway through constructing his own version, smashing up some old chest of draws in the process.