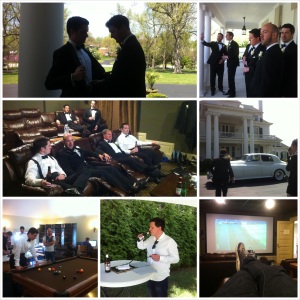 After breakfast with Dad, Joe and Luke at Shakespeare and Co to discuss last minute details, we join the rest of the Groomsmen on board the shuttles to take us up to Moundale Manor.

Moundale Manor is a 38-room private house in Winchester and only minutes from the church. Similar to Bullock-Bodley House, Moundale is a classic example of antebellum architecture, typical of neoclassical and Greek revival mansions of the Southern states. In essence, most likely a former slave plantation.

It’s here where we’ll get changed into our tuxedos, play killer on the pool table, play air hockey in the games room, watch Man Utd/Norwich in the home cinema while sinking a few beers on reclining sofas and wait for the call. It’s the sort of place you’d dreamed of having when you’re young, where the Sports Bar of the 90’s failed to replicate.

The place is so big, that up on the second floor Ellen and her bridesmaid are also getting ready. It takes a good 10 minutes to find one of the many bathrooms.

Hot sunny day, men walking around on fresh cut grass in suits, coaches to and from venues. It was all very FA Cup Final day like. After a few photos, it’s time to board the coaches for the short trip to the First Christian Church for the ceremony. It’s a church that’s been in the Collis family for generations, attended by Ellen’s Dad and his brothers.

The guests started to fill the church as we arrived, with Angie, the wedding coordinator, given us the final reminders of where to stand and where to hide.

The ceremony went without a hitch (sadly I’m not the first person in the world to crack a wedding related pun here). Tears, cheers and many happy years.

Luke wore that crown, and not a single person lined up at the alter felt the need to chuckle.

We congregated outside, lining the steps from the church to the street. Then the two stars of the show came down the steps, through the cheering crowds and into the waiting white Bentley, where they’d meet everyone back at Moundale Manor for cocktail hour.

It was here at Cocktail hour that I met Bill, Ellen’s uncle. He’s a former eye surgeon and has recently published his memoirs called Me, Myself and Eyes. I instantly had a hundred questions lined up for him, as you normally do when you meet somebody so interesting. Dad had met him last year at Luke and Ellen’s engagement party, and so I had been looking forward to hearing some of his many anecdotes since.

Then it was back on the coaches, and onto the Winchester Opera House for the reception.

On every table, at every seat, lay a personalised note for the guest. Ellen and Luke wrote one for every single person. 160 guests. I genuinely wondered at what point they realized the scale of the operation, yet conscious they’d gone way too far to back track.

But as Liza pointed out in her Maid of Honour speech, the pair of them, Luke and Ellen, genuinely value everyone in their lives. And so it’d never be a case of “actually, this is ridiculous, told you this would take too long”. 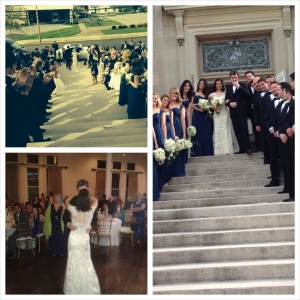 Mine was written by Ellen, as was most peoples (Luke’s ones will no doubt surface in several years as collectors items) and have to say was very touching. I’ve welled up a number of times over the last few days, in particular around the speeches; mother of the bride, mother of the groom and the bride herself giving particular touching speeches. Though I must admit, I do wonder where the emotional energy gets transferred to if not in the form of salty tears. And are there any side affects? Bags under the eyes? Brain tumor?

Then Joe’s speech; a brief history of the pre and post-Manhattan Luke Oliver.

Anecdotes from being forced to play Sunday League football by Dad, to Saturday afternoons shopping for World War 2 rifles at Islington war market (aged17), to working at the local fruit and veg shop to ringing the bell at the New York Stock Exchange.

I think it came in at around 17 minutes. He’d read it out to me earlier that morning at Moundale Manor shortly before getting ready.

The first dance was followed by a good healthy stint of Greek dancing led by Mrs C and her gang. I really enjoyed the Greek dancing, a perfect way to trick everyone onto the dance floor.

The live band played a great set, the Greek music fed into Irish ballads. It really was a great night.

We all piled back on the Hilton-bound coaches. Luke’s London mates were leading a sing song at the back. Never in my life have I more wished I knew the full lyrics to Fresh Prince of Bel Air. Still I manage to slide in on the parts I did know, and sip my drink during the parts I didn’t.

Once we’re back at the Hilton we, if somehow by default, head to the main centre of Lexington, an area that had hosted almost every after party of the last few days. Between running back and forth to the hotel to coordinate groups, I find myself on my jacks, still wearing the full-piece tuxedo and being subjected to taunts about attending ‘prom’ from various pissed college kids. Half thinking I might get my head kicked in, the other half assessing how much I probably deserved it for looking like this whilst on my own, I continued my search for everybody on the next street. Spirits are soon lifted when I meet Kateri and Casey, who’ve come to round everyone up.