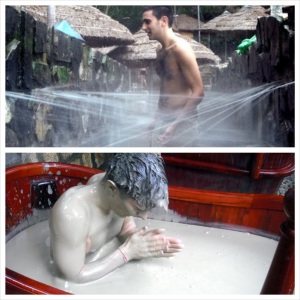 Nha Trang, and the cold and rainy weather puts us off swimming in the sea, although we do make the effort to inspect the beach. Ben went off to get his haircut while I made a start of Alex Garland’s novel The Beach. Ben’s haircut was pretty good actually, although he told me he had to fully utilise all 3 of his strikes in asking the barber to make altercations.

Went off to a health spa on the outskirts of town where in addition to the mud baths and Jacuzzis, we had unlimited access to the mini golf. Problem being there was no golf when we got there so we just settled for the mud bath package. A wooden bath filled with clay and hot water. Some people really will pay for anything.

We were not sure how long to stay, after all it was supposed to be a whole day thing, but found ourselves bored after 30 minutes. How long we have to stay here to warrant the entrance fee we paid, Ben questioned. I explained the law of diminishing returns to Ben, in which the optimum amount of time to leave would be when the cost/burden of each additional unit of time spent begins to outweigh the additional unit of enjoyment derived. What else would we do with our day?  We could solve the conundrum by devising ways to get kicked out of the complex via the swimming poo? At least that way we would be pushed rather than having to jump. There was a sign saying ‘No Diving’ so we could try that, although that’s there for our own safety. I would rather be kicked out for being a nuisance and so suggested a bomb, proper Macaulay Culkin style in Home Alone 2. Ben opted for the dead body look as he floated on the surface, head down motionless. I say body, it was so realistic that a ‘torso’ would perhaps be more appropriate; as such a word is normally only reserved to describe dead bodies found in your local canal on the News at Ten.

Just like I did in the days of friends birthday parties when we were kids, I began to crave a Mc. Donalds and/or a Slush Puppy. Like Pavlov’s Dogs, the swimming pool vibe was telling me that Leisure Centre food was appropriate.

A few beers at the backpacker hotspot Red Apple, we met a few Finnish guys who we headed to the Sailing Club with on the seafront via a few games of pool with some Aussies.