Spent breakfast on the boat discussing last night’s wild behaviour and the part Ryan-or-Bryan-or-Terry played in it all. He had really let his hair down. So what is the style of comedy here in Vietnam we pondered? Along with Andrew Price and Benny T, we discussed what we’d do if given 5 minutes to devise a short sketch for an audience consisting mainly of the Vietnamese elderly. What would they find funny? Burning an effigy of Richard Nixon or Lyndon B Johnson? Or is that just baiting the general taste for populism? A bit patronizing perhaps? Like throwing t-shirts out at a student union, exposing our desperation to be liked. Maybe if we burned JFK that would solve both problems as it would go against the popular and ill-informed opinion that JFK was some fair play, all-American hero while also highlighting that not every Westerner has forgot that the guy was a main component of the war. We could crack jokes about how he was the first to benefit from the Kurt Cobain/John Lennon effect; Die before your time and you’ll be eternally adored by the masses. Even if it’s in the shape of hooded jumpers, pin badges and black and white portrait posters sold at Wembley Market.

The boat started to move again and we headed to Cat Ba Island for our next activity: Jungle Trek. Along with the Aussies we forced ourselves to climb through the jungle, up to the look out tower that provided a 360 view of the Island. Getting off the boat, knowing exactly what we were in for was made worse by our unsatisfactory breakfast, consisting of one swamp fish and a bowl of rice between four men. Who do you think I am? Warren Fellows? 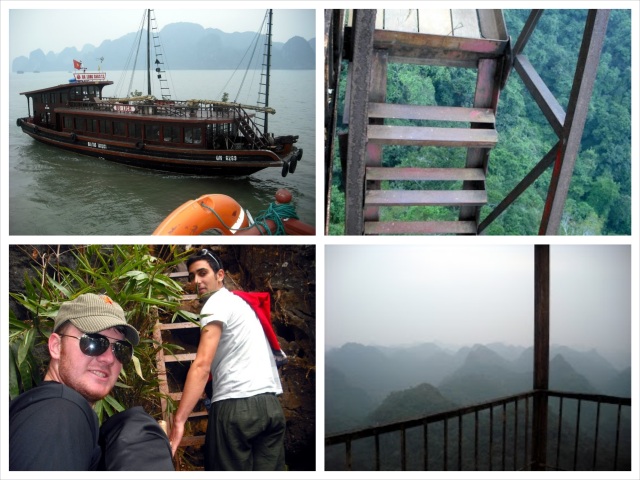 More and more stories from the night emerged during our climb and as we remembered the night’s events, I couldn’t help but feel a little bad that we might be ruining the walk for the two honeymooners who were trying to ignore our silly stories and concentrate on their trip of a lifetime. To be honest though, it’s hardly a great trip into the unknown. Forest Gump’s mother always said that “life is like a box of chocolates. You never know what you’re going to get”. Well that’s true, but with these kind of organized, well beaten-path trips, the box of chocolates in question is a big box of Quality Streets that comes complete with individually wrapped pieces of chocolate in colour coded wrappers which you can cross-reference with the little guide provided to see what they contain. And those that contain nuts, are legally obliged to tell you so. Take the danger out, and you take the fun with it. No surprises, you know exactly what your getting. Just like here. Safety galore except for the rusty old viewpoint on the summit, which is only accessed via 6 flights of rusty ladders.

I was a little nervous climbing those creaky rusting stairs and the joy of the view was slightly offset by the fact that the structure could collapse any minute and send us all rolling down the hill. I’m not scared of heights, but I am scared of falling from them to a horrible painful death.

On the way back down, me and Benny T rattled off our favourite quotes from film and TV simultaneously, him at the front of the group and me at the back. This wasn’t planned or engineered. This just happened, and what was even better was we loved and appreciated all the same quotes from all the same shows. He knew that the best episode in The Simpson is Lemon of Troy. He also agreed that Comic Book Guy had some of the best one-liners outside the main cast. He was also prone to shouting out “HEEEEYYYYY YOOOOU GGGGUUUYSSS” which I begrudgingly appreciated. I think it’s possible to really bond with somebody in a very short space of time over a mutual appreciation for the same quotes from the television/films that you both love. And to think this was the same guy who was quoting Little Britain when we first got on the coach yesterday. How my opinion of him has changed, though I still suspect him of being one of the kids at school to save his lunch money to buy that Jack Daniel’s zippo lighter on the way home. He did start talking about Xena: Warrior Princess, and that’s when I had to tell him I wasn’t “interested in all that to be honest mate”.

We all went back to childishly complaining about the long hike, like school children on a mundane field trip to a local post-sorting warehouse. Fair to say I went up that hill a man, and came down a petulant child.

We all jumped in the coaches that we had arrived in from the port. We all jumped on the one with Ryan-or-Bryan-or-Terry-or-Len (yeah the addition of Len came from somebody else on the boat, who’d completely misheard our tour guides name), who was know back to his communist self, ordering us on. The other coaches were all heading to the same hotel, so we weren’t fussed if we got on the wrong one, as it was only supposed to be a short trip to the Hotel. Obviously Ryan-or-Bryan-or-Terry-or-Len, did not have such a liberal approach to coach travel. He spotted an elderly French couple on his coach who shouldn’t have been. It was one of the Melbourne Girls who was sitting on her mate’s lap that gave away the fact that we had stowaways on board.

Me and Ben were discussing how much we thought Andrew Price sounded like the name of a General Manager of an Asda store when, Ryan-or-Bryan-or-Terry-or-Len started to demand the French couple get off, so the Melbourne Girl could sit down, despite her protests that it was “okay” and that she “didn’t mind” sitting on her friends lap.

Unfortunately Ryan-or-Bryan-or-Terry-or-Len didn’t give a shit, and went mental. Absolutely mental at this French couple, who were not causing anybody any discomfort with their presence. He had lost the argument that “one of my customers, have no seat, you get off coach”, as the Melbourne girl was know trying to show just how comfy she was nestled on Benny T’s chunky legs.

But now he’d lost the coach as he stepped up a gear and ordered the couple, who were both pushing 70, off the coach ignoring the fact we were in the middle of the dry countryside, up a uninhabited mountain in the baking sun. Where would they go? He didn’t care and ordered them off, foaming at the mouth as he did so. Horrible man. The whole coach would not back down and it was the same solidarity that has fought off countless dictators and tyrants over the years, and he was never going to win this. It was settled for the exchange of about $5. But we had seen just what was behind this man’s Jackie Chan grin, and what he was really capable of.

With many of the native people we have met in Vietnam, there appears to be a thin veil of geniality and chivalry while beneath they could all potentially be hard face, unscrupulous, mirthless and stolid bastards working behind a pain of glass at a border control checkpoint.

We checked in our bags and had a look at our hotel room, which consisted of me, Ben and Andrew Price before heading down to dinner. Exact same as we had for last night’s dinner, today’s breakfast and lunch earlier. Ryan-or-Bryan-or-Terry-or-Len came over and wanted to know if we wanted to party with him like we did last night because “last night, real good fun, you guys the best”. Andrew Price and Ben weren’t so keen and Benny T and the Melbourne girls were quick to leave the table on grounds they were going to sleep. Truth is they were going to sneak out and head into town. They would give us a shout when they were going. After seeing Ryan-or-Bryan-or-Terry-or-Len in action today on the coach made me feel uneasy around him now. I had already seen the sudden change from when he had picked me and Ben up from our Guesthouse in Hanoi, and did not trust the instability of the man. I passed, and headed for a walk down to the harbour by myself as it was a lovely evening. The sun had set and left a beautiful pink sky. It was peaceful enough for a group of kids to be playing a game of Shuttlecock in the middle of the road that ran parallel to the sea, using the zebra crossing as the net. They invited me along and I played with them for a while. I needed to see a bit of good human nature from these guys following that prick on the coach earlier and thought I had found it as I walked down the harbour chatting with one of the young lads. He had a cool flat, apparently, with an Xbox, a music system and a fridge full of beer. That’s where we were going now. Than came the question about how many girls I wanted and what I wanted to do with them. I called it a day with him and headed back feeling like the rich man who could never find anybody for genuine love or friendship. I don’t know which rich man in particular, but I’m sure there’s loads out there who feel like that. There’s more ways to feel like a millionaire out here than just your high spending power.

After a beer on my balcony looking out at floating nightclub in the harbour, I went to where I could actually hang out with genuine people. The Good Bar, where the Aussies were hiding.